Showing posts from February, 2020
Show all

Coronavirus ramblings and a lucky miss... 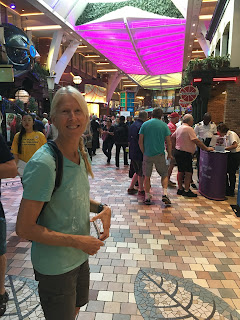 Caroline on the Royal Promenade, Deck 5, Allure of the Seas .  At double occupancy, the  Allure  has a capacity of 5,484 guests, plus 2,200 crew. This was an interesting time to be on a cruise ship.  Caroline and I had left the Celebrity Edge for the Royal Caribbean's Allure of the Seas in January.  On January 11 , China reported the first coronavirus ( COVID-19 ) fatality.  On January 23, Chinese authorities closed off the metropolis of Wuhan, reporting 17 deaths and 570 cases.  On January 31, the Trump administration suspended entry from any foreign traveler who had traveled to China in the past 14 days.  On this date, 213 deaths had been reported and about 9,800 people were reported infected.  On February 5th, crew and guests on the cruise ship Diamond Princess were quarantined in a Japanese port.  On February 21, the number of worldwide cases topped 75,000. After spending much of January on cruise ships with a very large international component, we arrived in Hawaii
Post a Comment
Read more

If you want to start a heated and vigorous debate in a cruising chat room or a ship's lounge, just bring up the issue of formal dress.  A recent article in the Washington Post noted how a query about relaxed dre ss codes on Facebook "...struck a nerve and sparked more than a few squabbles, differences of opinion and downright insults." I reposted the article on a Facebook group for Celebrity Captain's Club members (frequent travelers), and received similar reactions. So, I thought I would clarify the issue, so we could all be on the same page. Right... All of my cruises have been on Celebrity and Royal Caribbean (RC).  In January, I was on both the Celebrity  Edge and the RC  Allure of the Seas . The Edge is considered a "high end" ship (you can interpret this in many ways... more Captain's Club (like RC's Diamond) members, more expensive, many experienced cruisers, and an older/wealthier crowd).  The Allure clearly is a family-oriented
Post a Comment
Read more 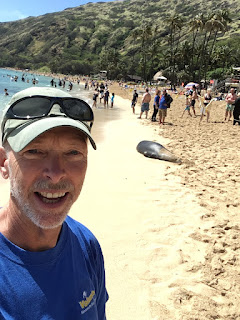 While Caroline and the Wanderlust yoga group drove to Ko Olina to snorkel, I headed over to the Hanauma Bay Nature Preserve to volunteer for a few hours. The weather was... perky. Windy, rainy, and cool. I parked in the staff lot and walked to the education program office. On the way, I noticed a number of birds feeding on a piece of bread in the parking lot. Let's see... cattle egrets (introduced), zebra doves (introduced), myna bird (introduced), and a chicken (introduced).  Not a great start for visiting a nature preserve!  And with the cats and the mongoose (more introductions), I wondered again about the city's ability to manage this area. The only non-human species I know somebody is attempting to manage is cats, with some restrictions on feeding and I believe a more concerted attempt to manage the cats as a TNVR colony. Last week there was a report of a critically ill Hawaiian monk seal on Oahu infected with the Toxoplasma gondii parasite. I ha
Post a Comment
Read more 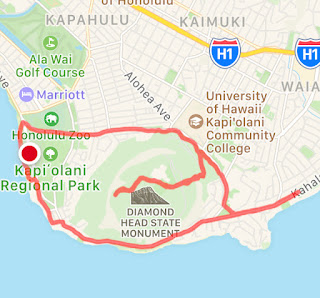 Last year Caroline and I signed up for the annual Great Aloha Run, an 8.2 mile fun run from Aloha Tower to the Aloha Stadium.  As we picked up our racing bibs on Saturday, we started chatting about the logistics... what time to get up (early), where to park, taking a bus to the start line, waiting for an hour with a few thousand other runners, standing in line for the porta-potties, walking or barely running for that first half mile because slow runners and walkers were near the front of the starting line instead of the back, waiting for awards, then driving back.  The route isn't even scenic... downtown Honolulu. So, a last minute change of plans was in order.  Instead of the Great Aloha Run, I would run one of my favorite Honolulu runs at the same time for a distance of 8 miles.  There was no finisher medal or tee at the end, but the scenery was great and I had lots of elbow room. This run started at Kapiolani Park near the Waikiki Aquarium, went around and up into Diamond
Post a Comment
Read more
More posts