When you think a wheel has fallen off your aircraft...

Eons ago, I took enough private pilot lessons to solo.  Today, there was a note in our local newspaper regarding a student pilot (flying one of USU's fleet of Diamond Star 40 aircraft) reporting an "Alert 2" issue (indicating that an aircraft is having major difficulties, and a difficult or crash landing may be expected). 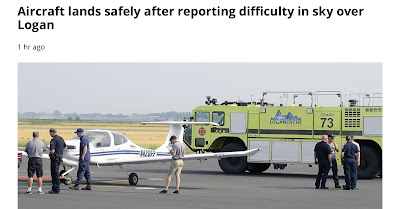 Wesley went through his private pilot training with this program and this aircraft. I'm glad students are trained to react accordingly when there is a potential emergency.

The Alert 2 article reminded me of my own experience with an "indicates that an aircraft is having major difficulties" event.  And I have no memory of thinking or even knowing about this alert system.  I was just going to broadcast a "Has my wheel fallen off?" message to anyone who had a radio and a pair of binoculars.

I had always been interested in learning to fly, but the process took too long, was too expensive, and I didn't have the time.  One semester, I signed up to audit the course, "Private Pilot Ground School," designed for students in the USU flight program (a FAA regulation Part 141 training program).  I didn't need the credits... I just wanted to be able to take the FAA Knowledge Examination required for private pilots.  I never finished the course.  It was always difficult to work plus be in class MWF 10-11, especially if there were weeks when I was out of town.  But it was interesting when I could attend, and it got me excited about flying.

Somehow, I connected with a ex-military pilot (and flying instructor) who was finishing his MS in engineering at USU (I probably picked up his name from an announcement on a bulletin board).  He had access to a Cessna 172 (a real step up in handling from a Cessna 152), and thus began a series of flying lessons.


As with all private pilot students, after demonstrating certain skills and competencies, the instructor jumps out of the right seat and says, "It's time to solo."  Soloing involves going through the checklists, taking off, making a short flight, and landing.  I can't speak for anyone else, but I was nervous.  As it turns out, in general, flying is easy.  Taking off isn't so bad.  But landing?  You do it right, or it's not called a landing... it's called a crash!

What is it like to land a small aircraft?  Well, you are going 100+ miles an hour as you enter the landing pattern.  You need to bleed off the speed, tell nearby aircraft what you plan to do (we live in uncontrolled airspace), keep an eye out for other aircraft, turn for landing, flare on approach, get those wheels on the runway, slow, then move off the runway and taxi to the terminal.  Easy peasy!

Okay, back to my first solo.  We had been practicing touch and goes, where you land on the runway and take off again without coming to a full stop.  Then the instructor told me to taxi to the terminal, and shut off the engine.  He proceeded to get out, said, "It's time to solo," closed his door, and walked into the terminal.

I went through the checklists, started the engine, taxied to the runway, and started my takeoff.  I reached rotation speed (Vr), pulled on the yoke, the nose started lifting off the ground, and the airplane begin to fly.  Easy peasy!

So all I had to do was stay in the landing pattern... first a crosswind turn to the left, then left on the downwind leg, another left for the base leg, and then that final left turn for the approach and landing... flying a big square.

Takeoff, no sweat. Then I radioed that I was going to go into my first turn, and as I started...

BOOM! KA-BOOM-BOOM! Metal crashing against metal! I heard later from my instructor that as I started that turn, my flight pattern suddenly became erratic. That "erratic" part was me swiveling my head around trying to finding out what just caused that BOOM! KA-BOOM-BOOM! noise. Now, there aren't that many moving parts here. The noise came from the other side of the cockpit, next to the right-hand seat. The door was closed. Nothing seemed out of place. Time for the next turn into my downwind leg.

Freak out! Okay, it's not the engine. The noise is coming from my right side, not forward or aft. And it only happened when I made the left turn. No abnormal noise when I am flying straight. What's in that area, what's in that area... Oh God. The right main tire.

Did I lose a wheel?

This airplane had a "tricycle" wheel system, with a nose wheel and two main wheels. The wheels were connected to the fuselage via a strut. Was some part of this mechanism flopping around below me? Then how was I to land...?

I could see nothing. I mean, inside there's just that right seat. I was strapped in, so I couldn't move over there and look out the right window.

So I suppose this is where I should have broadcast an "Alert 2" issue, indicating that an "aircraft is having major difficulties (i.e., a positive indication of fire on board the aircraft; faulty landing gear; no hydraulic pressure; engine failure on a two-engine large aircraft; etc.). A difficult or crash landing may be expected." Except, I didn't know about this, or think about it. All I was thinking was... SHIT! SHIT! SHIT!

Okay, I'm going to radio to base to see if someone can come outside with binoculars and check whether my wheels are still there. Because, what else could that BOOM! KA-BOOM-BOOM! be?

Wait... where is that right seat belt? Could the seat belt buckle be hanging outside the door, wacking the fuselage every time I turn? That could explain why I didn't hear anything when flying straight.

The more I thought about it, the more I was convinced that a dangling seat belt was the culprit. The noise location matched. I never had to think about that buckle before because my INSTRUCTOR had been wearing it, and all I had to do, by the checklist, was make sure he had it on.

So that frigging seat belt buckle was smashing against the fuselage, making the BOOM! KA-BOOM-BOOM! sounds. Well, it can bust a hole in the door for all I care! I'm getting this baby on the ground!

Turn to base... as gentle as I could (no noise). Then turn to final... line up for landing, flare, and touch-down. I taxied to the terminal, went through the checklist for a full stop, turned off the engine, unbuckled my seat belt, leaned over to check out that other seat belt, and there it was... closed in the door. Gosh, who could have done this? Oh, my INSTRUCTOR!

Ha-ha. Oops. I still don't know whether it was intentional or not. Shithead.