Governor Herbert’s color-coded health guidance system now has Box Elder, Cache, and Rich Counties in the “yellow” or low risk phase. We know this comes as a relief to many, because it means we “flattened the curve” and avoided overwhelming our local health care system with sick COVID-19 patients.

This outcome came at a terrible cost for many individuals and businesses. Our routines were uprooted, people lost their incomes, businesses suffered major losses, and travel plans were postponed. 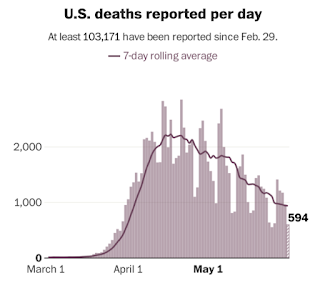 And people have suffered. This week, we exceeded 100,000 COVID-19 deaths in the U.S. According to the Centers for Disease Control and Prevention (CDC), there have been over 1,700,000 cases, with over 8,800 in Utah. Some cases involved hospitalization, but most people have stayed home with fever or chills, a cough, shortness of breath or difficulty breathing, fatigue, muscle or body aches, headaches, or a number of other symptoms. Recovery occurs, but we don’t yet know the long-term impact of this disease on our health.

Many people are asymptomatic, infected with the virus but not showing obvious symptoms. The CDC is estimating that 35% of infections are asymptomatic, or one out of three people infected. The virus is thought to spread mainly through respiratory droplets produced when an infected person coughs, sneezes, talks, or sings.

Over the past two weeks, we’ve observed many people enjoying the “low risk phase” of this pandemic in Utah. However, we’ve concluded that the interpretation of the governor’s guidance is nuanced. The “yellow” risk phase doesn’t mean behave as if everything is back to normal. Go to coronavirus.utah.gov to read the recommendations: face coverings worn in public settings where social distancing measures are difficult to maintain, wash hands frequently with soap and water for at least 20 seconds, use hand sanitizer frequently, avoid touching your face, and take extra precautions and follow strict hygiene standards when interacting with high-risk individuals.

Yet, when we watch members of our community shop for groceries, picnic, play softball or volleyball in our parks, visit stores with Memorial Day sales, or walk with friends in their neighborhoods, few people are maintaining social distancing, and even fewer are wearing masks. We don’t think we’ve seen a single child or teen wearing a mask. In other words, there are too many people not abiding by the governor’s recommendations. It’s not just happening in Utah. Nationally, you’ve probably seen photos of people crowding beaches, filling bars and restaurants, and attending rallies, with nary a mask in sight.

Why is this? Are people oblivious to the biology of this coronavirus? It’s contagious, it’s lethal for some people, and it’s everywhere, including northern Utah. There is no vaccine, and there won’t be one until next year at the earliest. For seniors and people with underlying medical conditions, the virus is particularly harmful, and this is true whether you know you have an underlying medical condition or not. For example, the CDC estimates that 7.3 million people have diabetes but are undiagnosed. Since people with diabetes are more likely to experience complications when infected with the novel coronavirus, millions are walking around and don’t realize that they have an underlying medical condition. And you can’t just look at a person and know whether they have a serious heart condition, or are immunocompromised, or have lung or liver disease. You have to assume that every person you meet at the grocery store, in the park, or at a restaurant is not just susceptible, but a high-risk individual, and that by following the governor’s recommendations, you could be saving their life. In addition, this virus is unpredictable, and you can be its next target even if you are young and feel healthy.

The advice coming from the Utah Department of Health, the Bear River Health Department, and the CDC is there to keep us safe. The recommendations are very clear. Wear a mask when you can’t maintain social distancing standards, use proper sanitation procedures, and be especially careful around people who are high-risk. And ask that your friends and neighbors do the same, because it may be your life, or the life of a loved one, that’s saved.


This is how we fight this disease. Oh, and when a vaccine is developed, get vaccinated.
This article also appeared in the Herald Journal newspaper. 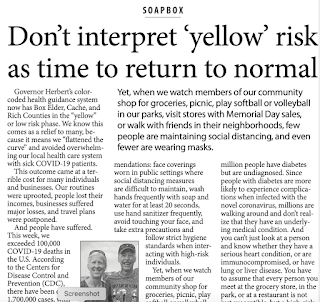