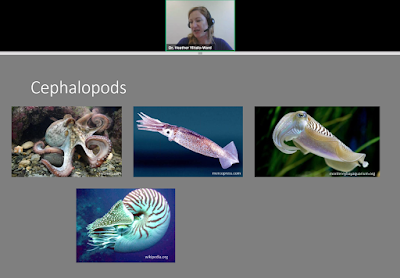 Everyone has had to adapt to the 2020-2021 Covid-19 pandemic. Wearing masks (single or double layers), trying to interpret muffled speech, and avoiding or being avoided by family and friends are all part of this new reality. Thankfully, with vaccination programs well underway, life will soon be a bit more relaxed - and less deadly. However, I am concerned about the stall in the decline of active cases nationwide, the surge in some countries, and those pesky virus variants that may be more transmisible. Our adaptations may continue for the year. 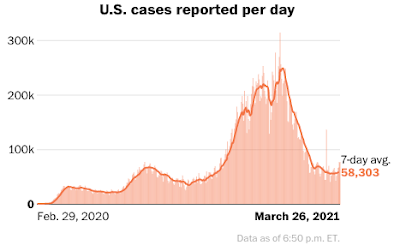 One company that has been a boon during the past year (and the stock price increase reflects this) is Zoom. Zoom is a video communications company, and has both a free basic version and a fee-based professional or business version. This means it is available to practically anyone with a device that has a camera and can connect to the Internet. I've used Zoom on a regular basis, for everything from a weekly family visit, to church services, to ukulele jams. I've connected to Rotary meetings, Americorps Seniors meetings, and Medical Reserve Corps trainings. It's easy to use, and the basic or free version gives you 40 minutes of connectivity if you set up the conference, or unlimited minutes if the organizer has a paid version.

Wednesday was a new milestone for me... a full 6.5 hours on Zoom, with 5 separate meetings. What could grab my attention to keep my eyes pointed at a computer screen for 6.5 hours?

My day started off with watching a Netflix film that had just been released, Seaspiracy (and I just read a rebuttal posted hours ago to some of the points raised in the film concerning the Marine Stewardship Council's sustainable fisheries certification program). I have a deep interest in marine fisheries, and I have distributed literally tens of thousands Seafood Watch wallet cards printed by the the Monterey Bay Aquarium, and talked with hundreds of people about sustainable seafood. Daughter Katelin even wrote her MS thesis at Virginia Tech on estimating management uncertainty in select marine fisheries (not because of me, of course). 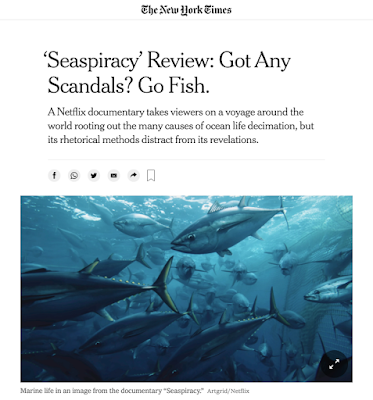 I'm also a volunteer with the Hanauma Bay Education Program on O'ahu, and an experienced SCUBA diver, which put a seminar on Hawaiian cephalopods on my calendar. But first, it was birds and windows.

Depending on who you talk to, bird collisions with windows rank in the top 5 causes of bird mortality in the US (excluding habitat loss). And the University of Utah's Osher Lifelong Learning Institute hosted a Zoom seminar titled "Saving Birds One Window At A Time."

I've been the president of 3 different local Audubon Societies, so I'm interested in this important topic. Big, tall buildings kill loads of migrating birds, but the sheer number of single households around trees and shrubs means our homes are the biggest cause of window collisions. Bottom line, anything you put on the INSIDE of your windows to prevent collisions is mostly ineffective. The American Bird Conservancy has published a series of guidelines to help homeowners prepare their yards and windows to minimize this risk to birds.
That was Zoom hour 1. I just had time to pour a cup of coffee when it was followed by a presentation titled "Cephalopods of Hawai'i." I love seeing octopi, squid, and cuttlefish when snorkeling or diving. I'm a fan of the film, My Octopus Teacher on Netflix (I own no stock in either Zoom or Netflix, by the way). Great movie, and highly recommended. It may change your dining behavior the next time octopus is on the menu. 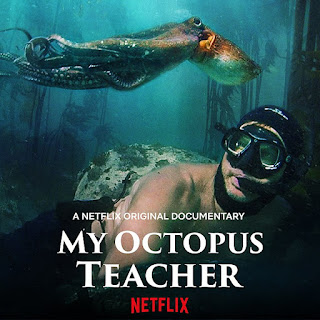 Back to "Cephalopods of Hawai'i." This seminar was coordinated by NOAA's Hawai'i Office of National Marine Sanctuaries, and featured Dr. Heather Ylitalo-Ward, a marine biologist with the Hawai'i Division of Aquatic Resources. Interesting stuff! And she liked the film My Octopus Teacher as well. The seminar was for teachers, students, and the interested public (there were about 500 people signed in), and participants ended up with... a certificate of attendance! In line with the education focus, the entire presentation is now available online. It wasn't conducted on Zoom, but it was a similar communications platform. 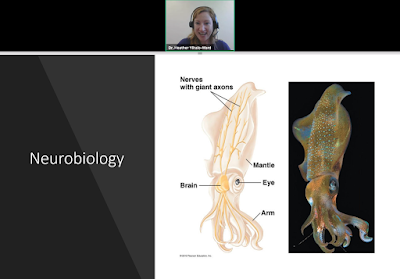 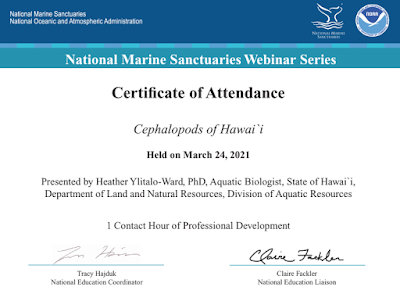 Hour 2, over. I had a 2 hour break before the next Zoom meeting, so I took this time to have some lunch and work out on the exercise bike.

Next up, cats and wildlife. I've blogged a lot about this topic, particularly in Hawai'i. Dr. Peter Mara co-wrote an influential paper on the impact of cats on bird populations, and also co-wrote a popular book on the topic (overall, a very powerful message, but the book has a number of misleading claims, in my opinion). Here, he was presenting as a guest of the USU Ecology Center; the seminar seemed to be his canned presentation on the topic. He didn't really do any homework about USU, because he could have learned that USU has a very successful TNRM program dating back over a decade. The primary point of the seminar was that cats are the primary mortality source for birds (numbering between 1-2 billion dead birds per year), towering over all other sources of mortality (except for habitat loss). 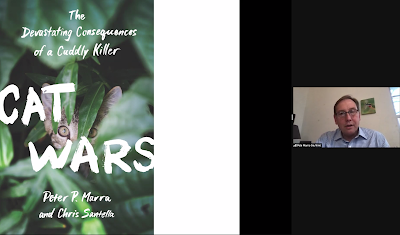 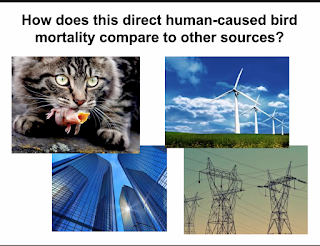 I don't want to take the time and space now to debate Dr. Mara, but perhaps I'll get the opportunity to present my views to his students at Georgetown during one of my visits to DC.

I had a half hour break, made some Bengali spice tea, and sat down for 30 minutes with members of the Cache Valley Unitarian Universalists to discuss community awareness issues. I had to bow out early because of my next Zoom meeting, starting at 6. This was my longest Zoom meeting, lasting 3 hours. And it happened because of a news item I had read. 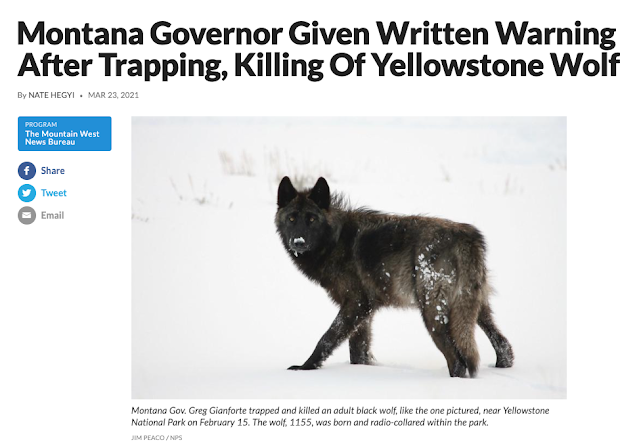 Montana Governor Gianforte failed to complete the required wolf trapping course prior to killing his wolf. The situation reminded me of a similar issue in Utah, when then Chief of the Utah Division of Wildlife Resources, Jim Karpowitz, realized he had shot 2 sage grouse illegally, and asked his employee to issue him a citation (he paid a fine of $138). In an email to his staff, he wrote, "This incident demonstrated to me how easy it is to unintentionally violate a law while hunting. I can tell you that even though this is very embarrassing, it feels good to have taken responsibility for the error I made and to hold myself accountable. I apologize if I have caused embarrassment to any of you, the division or the state of Utah."

Looks like the MT governor didn't have same same drive to be an example to his employees and the state's citizens. What's the message? Don't worry about the requirements for trapping a wolf legally. 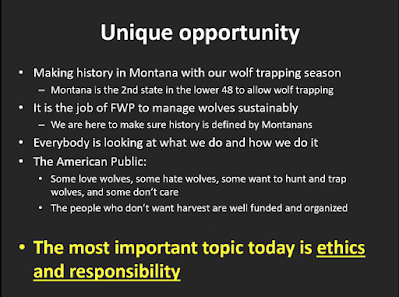 From the outset, there was a clear focus of the course on ethics, responsibility, and regulations.  First, however, there was a hour of presentations on the history of gray wolves in Montana and a synopsis of wolf biology. 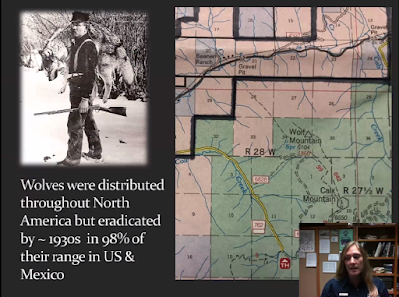 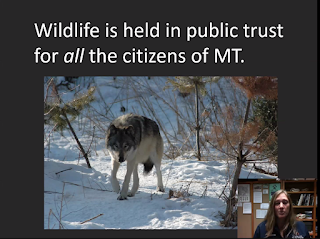 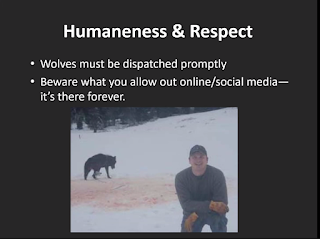 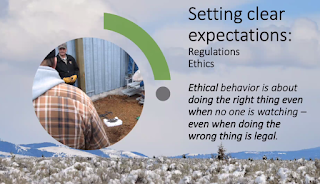 Only 1 hour was spent on discussing traps and sets, and then only in the context of explaining the regulations for pan tension, jaw size, swivel placement, trap checks and trap tags, and setting traps near trails, roads, and homes. You want to learn how to trap wolves? Find a master trapper, and ask that person to show you. 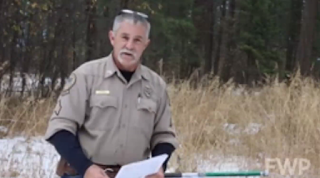 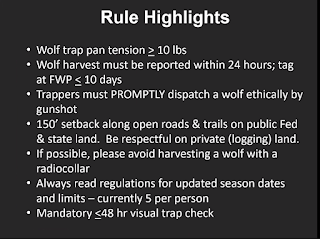 I wondered if the Montana Fish, Wildlife, and Parks employees giving the presentations and answering questions felt pressure to bring their A-game because Governor Gianforte was enrolled (unless he wasn't... there was no list of participants available to those of us enrolled).

Now, it looks like for $10-12 I can purchase a wolf tag!
I wonder if my friend Carter Niemeyer has taken this course, which is a funny thought, since Carter was one of the first people trapping wolves in the state, even when they were still listed as endangered (he was a critical part of the recovery team). If you want to read about Carter's adventures during this time, he's written a couple of candid books. Here's a copy of his first book cover, featured on a poster advertising his visit to my students at USU in 2012. 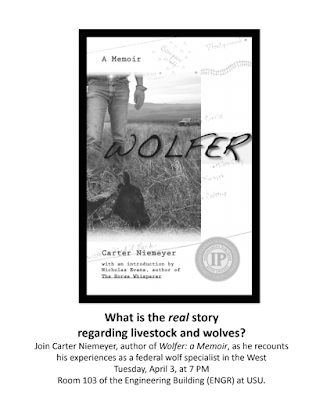 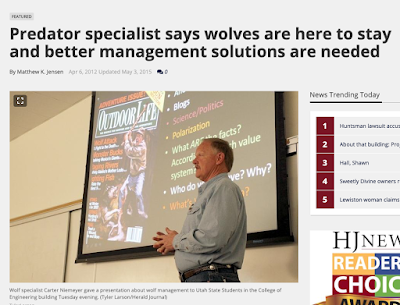 •••••
That was a long day on Zoom, covering many topics! But, with a comfortable chair, a never-ending cup of coffee or tea, enough time for bathroom breaks, and the alleged company of MT Governor Gianforte, it was doable, and for the most part, enjoyable. I have a choice next week of a meeting via Zoom or in-person, and I've chosen the in-person version to celebrate my vaccinations. But I'm not knocking Zoom... I am glad it is available to keep communication flowing during the pandemic! 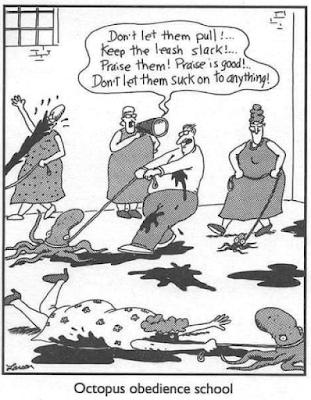 The politics of non-alcoholic beer - a continuing saga of misinformation