Our last stop in French Polynesia was Bora Bora. For the GIs who were stationed here during WWII, it must have been hard to leave! Today, the economic driver is tourism so, as with Mo'orea, a ship with 3000+ guests is a big deal (the population estimate in 2017 in Bora Bora was a bit past 10000).

Over email, we had arranged a 2-tank dive with Eleuthera Bora Diving Center.  This company is not as big as the "big dog" in the region (TopDive), so their niche is superior service with small groups.  We had 3 divers on our boat (Caroline, Ginny Aldrich, and me), plus instructor Max. 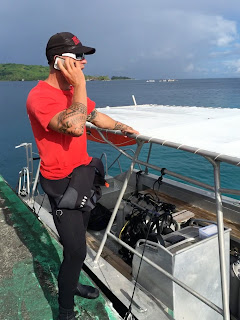 Max had a peculiar accent, and he had us guess his nationality.  We were all wrong.  He is French, but lived in Australia for a number of years.  So his English is French-Aussie! 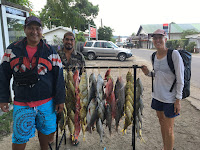 But... let me back up.  We arrived on the dock (tender lifeboats again) about an hour early, so we walked up and down the main street and around the docks.  Before we even left the Celebrity Solstice, we had watched a small fishing boat come up to our huge ship and call to someone on a lower deck, “Parlez-vous Français?”  I couldn't hear the answer, but the little boat turned away a minute later, so I assume they got no reply.  When we were walking on the main street, we saw these same guys hanging up newly caught fish for sale, so it looks like they were initially just trying to get the ship to buy some fresh fish!

We then walked some more, watching people... and dogs. 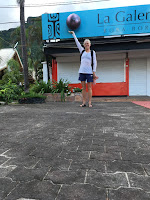 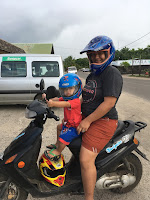 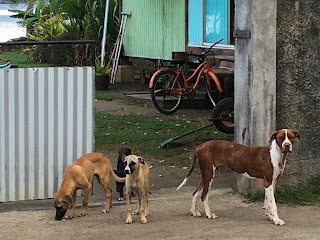 On the other side of the dock, there was a sign that, I assume, stated "no alcohol."  So of course we had to pick up the various bottle tops scattered around there.  There were 2 colorful residents having their morning "tea" and through miming we asked which were the better drinks.  They recommended Tahitian beer (but they were drinking something much stronger). 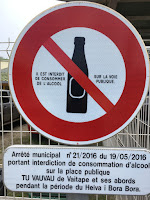 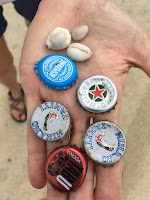 Back to the dive boat.    As we left the dock, we found ourselves in the middle of a group of 10 paddling canoes.  Max shut the motor to allow them to pass us, and those paddlers passed us close enough that they all had to paddle on the opposite side of the canoe or else hit our boat with their paddles! 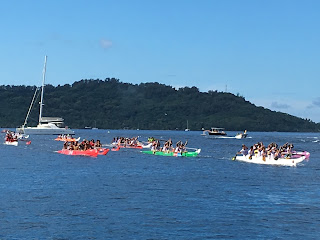 We first went to a spot just outside the reef to look for blacktip reef and lemon sharks.  We saw many fish, a white-mouth moray eel, and a "marshmallow sea cucumber" (a leopard sea cucumber?) that was HUGE... over 2 feet long and with a kagillion tiny feet.  Great reef, with excellent visibility.  We saw maybe 6 blacktips, 1 sea turtle (green?), and the cutest little rock with dozens of small fish surrounding it.  If you put your hand near the rock, they seemed to assume you were part of the reef, and just swam around.  I moved my face real close, and fish were just inches from my mask.  Fun!  But... no lemon sharks.


After some hot tea and cookies, we motored inside the reef for our second dive.  This dive was disappointing.  We went to a channel to get a chance to see manta and spotted eagle rays (didn't really look like manta habitat).  The water was not particularly clear, and we saw maybe 4-5 spotted eagle rays in the distance for just seconds.  I think, overall, these 2 dives probably rated below average for dives on Bora Bora.  In diving, you get what you get. 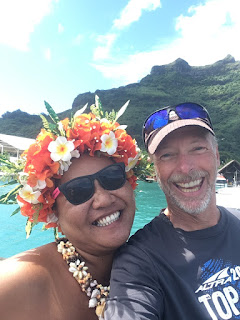 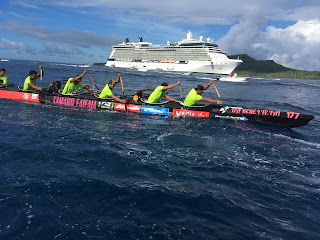 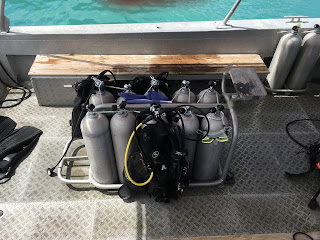 "From the point of view of a tapeworm, man was created by God to serve the appetite of the tapeworm." - Ed Abbey