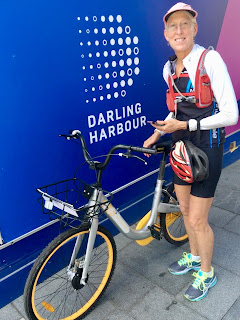 Logan will be getting its first “bike-share” program soon.  I’ve used the “docked” bikes in Washington DC before, and DC residents now have a dockless option as well.  In Sydney, I’ve seen dockless shared bikes from at least 3 different companies, and from an esthetic perspective, I am not impressed.  It’s not how the bikes look... they are meant to be bold and obvious.  It’s just that they are often left in awkward places, affecting the viewscape.  There’s a bike, just sitting on the sidewalk next to a statue or building... bold and obvious.  And I am surprised at the number that have been junked or vandalized, again adding to the negative impact on the viewscape.  Caroline and I estimate that 25% of the bikes we’ve seen have been in bad to unusable condition.

I support bikes and cycling, for both recreation and as a form of transportation.  I hope the dockless experiment in Logan takes heed of the issues in other communities to make shared bicycles work, and avoiding the negative publicity associated with unsightly bikes and uncaring riders.

Here are a few of the issues that Logan should consider:

1) For all 3 brands we looked at, none were sized correctly for a person about 5 foot 9 or taller.  It’s the legs... you want to get the seat up high enough that your leg can extend when the pedal is depressed.  You really want to check this out before you rent... an hour on a small bike can be torture.

2) You use the app to find a bike, and track it down.  Then, you notice that it is broken or inoperable.  We saw bent wheels, a broken handlebar, loose handlebars, a handlebar on 180 degrees in the wrong direction... all issues that prevent the bike from operating safely.  Minor issues were that only half of the kickstands seemed to function correctly (holding the bike up), the baskets were bent, and spokes were bent. 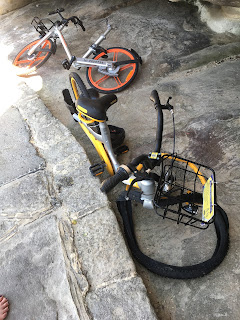 3) You really can’t ride with a friend.  We spent about 30 minutes trying to find 2 bikes together, then spent the next 30 minutes looking for 1 functional bike.  Yes, there is an app that tells you where the bikes are, but not whether they are functional.  And sometimes there was no bike where the app said one was waiting.  This is as opposed to the docked bike... you know exactly where to go to find 1 or more bikes.

4) Helmets.  Usually, there were no helmets.  That’s okay, because we brought our own.  But a few bikes had helmets in the basket.  Were we responsible for carrying around those extra helmets all day? 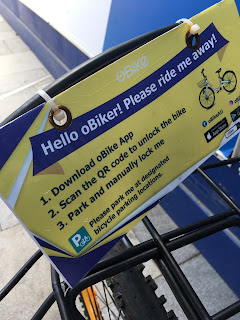 5) The one bike we tried took about 10 minutes to figure out how to unlock it.  Download the app before we go looking for a bike, check.  Scan the QR code on the bike, check.  Have the app keep telling us to make sure our Bluetooth is turned on, che... wait a minute.  It was turned on, all 5 times we tried to use the QR code.  Okay, type in the bike ID number.  The lock opened on the second try.  Wow, that was fast and efficient... NOT!.

6) The bike we used was a single speed.  Be aware of where you need the bicycle.  If you are going up and down hills, this may be awkward.  The brakes did work, thank goodness.

7) People can game the system.  Want a bike where you want it, when you want it?  Readjust the handlebars to make it look nonfunctional.  Park it out of sight behind some bushes, or around a corner.  Lock it with your own lock.  Every time this happens, there’s one more bike out of circulation.  Why do this?  Well, it’s a bike that someone else maintains.  Your personal bike won’t be stolen.  And it is there when you need it, instead of spending time trying to find one.

Well, we only had one bike.  We rode it for about 12 minutes, then turned it back in.  Check-in was fast, but I don’t think the company will like Caroline’s review.  The cost was $1.68 Australian.  Of course, we had to give the company a $49 AUD deposit as we set up our account.  Finally, we walked over to a hotel that had a docked bike program.  There were 3 bikes, all in great condition.  They cost more ($11 for 1 hour, $22 for 4 hours), but they were there, operable, and there were 2!  However, we returned the next day, and 2 of the 3 bikes told us “In need of service”  when we tried to check them out.  They looked fine. 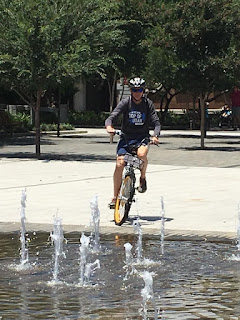 I don’t know how many dockless bikes are planned for Logan, but as of right now, I am not a fan.  They are easy to vandalize, awkward to make firm plans around, and not sized correctly for taller people.  Logan should reconsider. 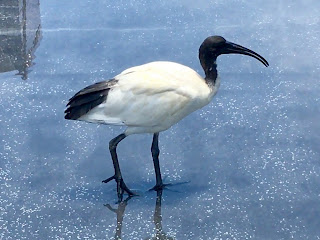 All of my cruises have been on Celebrity and Royal Caribbean (RC).  In January, I was on both the Celebrity Edge and the RC Allure of the Seas. The Edge is considered a "high end" ship (you can interpret this in many ways... more Captain's Club (like RC's Diamond) members, more expensive, many experienced cruisers, and an older/wealthier crowd).  The Allure clearly is a family-oriented ship, with a miniat…
Read more

That underwater portion and the portion below the high tide line?  That is the Hanauma Bay Marine Life Conservation District, designated as the first MLCD in 1967.  The Hanauma Bay…
Read more

On May 19, two mountain bikers were riding near North Bend, Washington, when they noticed a mountain lion (also called a cougar or puma) was following them.  I don't have the full details, but I've read that they stopped, yelled, put their bikes between them and the lion... things that almost all lion experts recommend to discourage an attack.  The lion persisted, however, grabbing one cyclist by the head, then chasing the other cyclist as that cyclist ran away.  The first cyclist attacked got back on his bike, escaped, and called for help. The second cyclist, Sonja J. Brooks, tragically, was found dead.


“They stopped to confront the cougar, they did everything right, everything that we counsel people to do,” WDFW Captain Alan Myers said. “Do not play dead — fight back. Fight back with everything you’ve got,” he said. “In most instances, people survive attacks from cougars that occur if they fight back.”

Why did this cougar attack these cyclists?  Indeed, why would a cougar, wh…
Read more