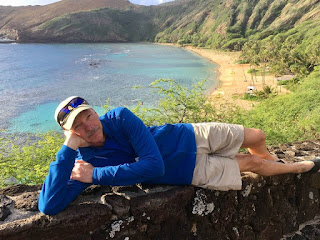 When I lived in Honolulu in 1999, we visited the Hanauma Bay Nature Preserve and Marine Life Conservation District often.  At some point, Jeff Kuwabara, who was in charge of the education program at the time, shamed me into volunteering.  Since 2000, I have volunteered at Hanauma Bay every time I have visited Oahu.  Caroline and I volunteered yesterday, and we will volunteer again when we return in February.


Hanauma Bay has changed a lot since we started volunteering in 2000.  We used to put a tarp up on the beach, lead tours to discuss the marine life and the geology, and pick up debris.  Every time it rained, our tarp became extremely popular!  A huge focus was keeping visitors from walking on the reef.  Soon, manager Alan Hong's dream was completed, and the Marine Education Center was opened.  Among other things, all visitors to the bay were required to view an educational and safety video at least once per year.  That led to a new volunteer activity, welcoming visitors and running the video.

When I return to Hawaii in February, I'll write more about the life and times of volunteers at the bay.  For now, I just want to mention an observation that struck me yesterday.  In addition to the pigeons (rock doves) and chickens, there are a lot more cats and mongoose present all over the nature preserve than I remember! 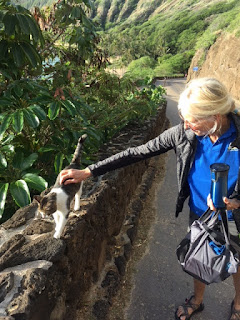 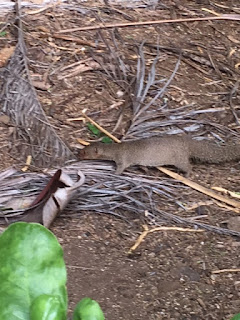 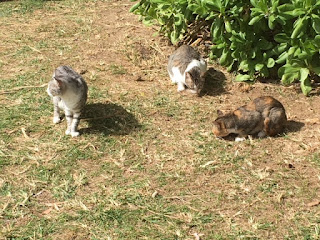 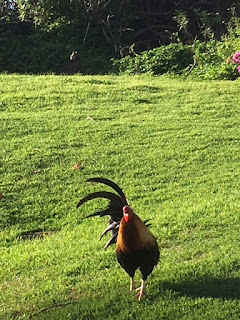 It's a nature preserve, right? You would think that exotics like mongoose, cats, pigeons, and chickens would be personae non gratae, right? But there are reasons -- good and bad -- why these animals are there. For example, the chickens have been tolerated or encouraged for insect control. The pigeons? Well, Oahu doesn't have the issue with gulls on the beach, so pigeons have to pick up the food waste visitors leave behind. I think that food waste, intentional and unintentional, also supports the cats and mongoose. 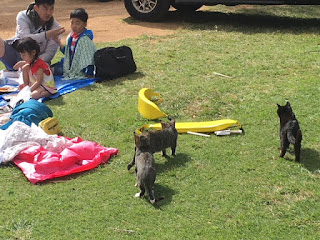 I hope to learn more about how mongoose and cats are managed at the bay. I'm certain there are "official" policies and unofficial actions.

I did uncover one surprise.  A number of years ago, I was allowed to experiment with the return of an educational table right on the beach.  Now there is a poster behind the visitor information desk documenting my effort! 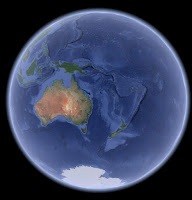 Tomorrow, we leave for Sydney, Australia.  We will be there for 2 weeks, through both Christmas and New Years.  We've heard about the spectacular fireworks over the Sydney Harbour (= Harbor) Bridge on New Years Eve.  We hope to watch it!