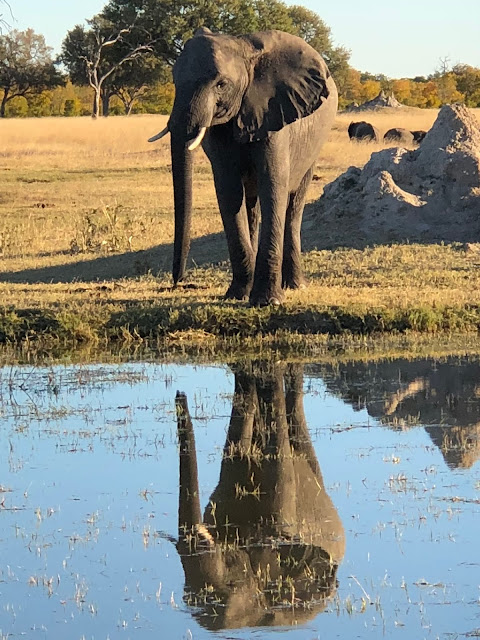 Hwange National Park!  This was our first exposure to the wilds of southern Africa, and it didn't disappoint.  I knew we were in for something special when we transferred to Toyota Land Rovers and were told that we would be at the camp in two hours (and we were told to prepare for an "African massage"... a bouncy ride). 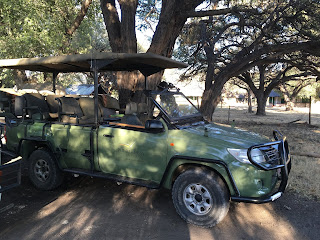 On the way to the camp, we saw baboons, a giraffe, impalas, and a few elephants.  Wow!  We made the guide stop at every one.  Little did we know that his kind smile (not a smirk) was because we were going through what probably every tourist goes through before they've seen their 100th elephant.

We were driving on sandy "roads" (Kalahari sand), and I noticed a single railway line to the side.  I suddenly had an epiphany, and I asked Kingsley, the guide driving us, "Have you heard of Cecil the Lion?"  "Yes," he replied, "We are close to where he was killed."

Cecil was a 12+ year old male lion, recognizable and oft photographed, living in Hwange National Park until killed by trophy hunter Walter Palmer in 2015.  The death of Cecil would have gone unnoticed except for two things: his notoriety to legions of park visitors (but not locals), and the fact that this lion was being studied by an Oxford research team, complete with the lion wearing a GPS collar to allow satellite tracking.  I've use this as a case study in both my wildlife courses, but, ironically enough, I wouldn't have been able to tell you the country.  It was Zimbabwe!  It was Hwange National Park!  And I was there! 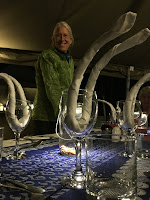 We got to our camp, Makalolo, at dark.  Orientation ("After dark, you must be escorted to your tent.  In the morning, the camp area will be searched for animals and you can leave at first light (about 6:30 AM).  If you need help at night, don't leave your tent.  Turn your lights on and use the airhorn in your room.  If you hear an airhorn go off, turn your lights off so staff can find the tent with the emergency.")  Then, time for dinner!  Except for it being COLD (probably high 40s... it was the middle of winter in southern Africa), the open dining room was pleasant.  I was impressed with how the staff really focused on the small details of food and drink presentation.  Then it was time to be escorted to our tents for the night.  Our guides took us to our tents while carrying a rifle (the rifle was carried only in Hwange).


The morning routine was fairly standard.  We'd get a wake up shout ("Wakey wakey!") at 6, after the camp had been checked for dangerous animals.  Our tent was ambient temperature, so we dressed quickly, and we were allowed to leave at 6:30 (mornings and evenings were cold, and days were short... we were in southern Africa at their winter solstice).  After a quick breakfast, we were on the Land Rovers at 7 sharp.

Since we had arrived after dark, this morning gave us our first glimpse of the savanna surrounding us.  This is an afternoon photo, with Caroline standing on the edge of a small above ground pool (very popular during their summer, not the winter).  See those paths?  Elephants, coming to drink from the pool at night.

We had other visitors as well.  Here are some hyena tracks next to the pool. 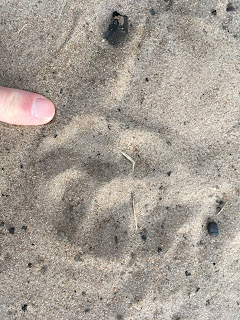 Then it was off to find some animals!  Oh, and we had to stay warm while experiencing our African massage. 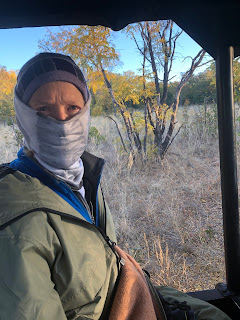 We would start off with long underwear, a fleece coat, an overcoat, gloves, beanie cap, and a blanket.  By noon, we could just be wearing t-shirts, but when the sun went down again, all the clothes came back out.  I got used to peeling off the coats, gloves, hat, and down vest as the day went on, putting them in my pack, then reversing the process at sundown. 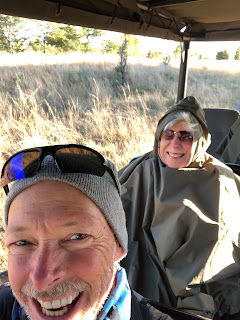 But early morning and late afternoon is when the animals were active, so no one was complaining. Most of these photos, by the way, were taken with an iPhone SE (developed in 2016), so "old" technology.  The remainder were taken with Lisa's iPhone 8.


Although we were on a trip organized by Overseas Adventure Travel, Wilderness Safaris ran the camps.  We generally had a morning and an evening safari.  Wilderness Safaris maintained a series of borehole pumps that filled a number of small ponds; these were a magnet for thirsty animals.  After leaving at 7, we would drive around until 10, and have a coffee/tea/potty break, and finally return around noon.  We would have lunch, then have free time until 3 (but no wandering around). Usually there was a short lecture and discussion at 3, then we were off at 4ish.  Every other day, we'd have a "sundowner", or a stop with refreshments as the sun was setting, before returning to camp at 7. 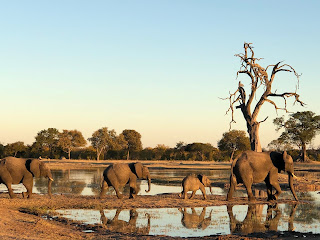 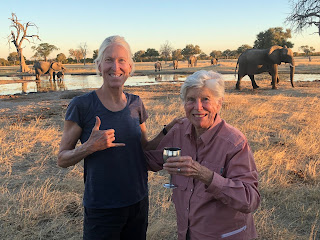 Our guides in Hwange were great, Kingsley and Farai. 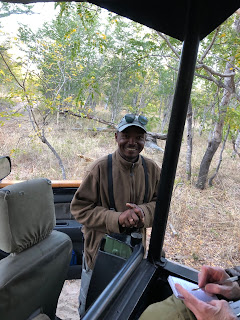 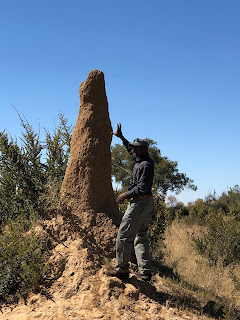 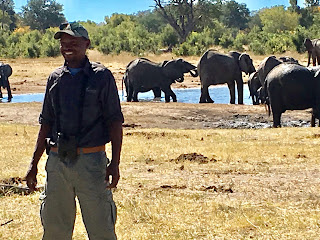 When we left Hwange on the fourth day, there was a bit of regret that we had seen everything!  What would be left for the other three camps?  Little did we know that southern Africa has a LOT to offer! 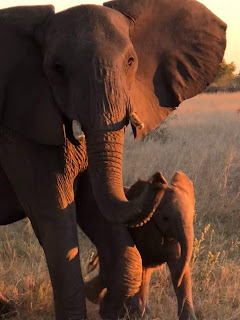 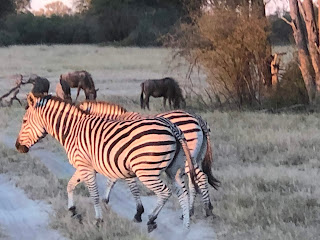 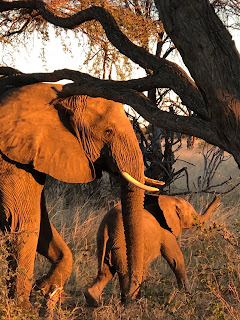