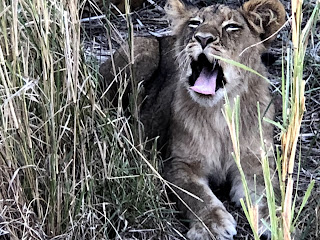 After visiting Hwange National Park, our next destination was Kafue National Park in Zambia.  I admit that I had wondered whether it would just be a continuation of our Hwange experience, but I learned that each ecoregion had unique and fascinating characteristics.

We traveled to Kafue by bus, plane, and Land Rover.  On the way, we visited a small village and an elementary school.


After another flight and drive, we made it to camp, with two leopards feeding on a hippo carcass on the way.

Okay, before I go on, I have to note that I had four wishes before setting off on this African trip.  The four wishes were:

•  Finally figure out where the Southern Cross is and how it is used for navigation.

•  Watch a dung beetle do its thing.

• Hear and feel an elephant rumble.

I ended up completing two of these, partially completed one, and failed on one.  Stay tuned for my successes and failures.

Again, we arrived at camp at night, and were told to stay in our tents until about 6:30 am, when we could see any animal still roaming the premises.  The morning gave us our first view of this camp, alongside the Lufupa River. 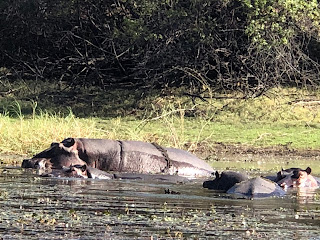 All of my cruises have been on Celebrity and Royal Caribbean (RC).  In January, I was on both the Celebrity Edge and the RC Allure of the Seas. The Edge is considered a "high end" ship (you can interpret this in many ways... more Captain's Club (like RC's Diamond) members, more expensive, many experienced cruisers, and an older/wealthier crowd).  The Allure clearly is a family-oriented ship, with a miniat…
Read more

That underwater portion and the portion below the high tide line?  That is the Hanauma Bay Marine Life Conservation District, designated as the first MLCD in 1967.  The Hanauma Bay…
Read more 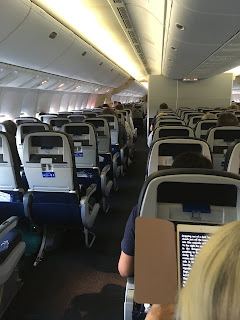 At the time I write this, the coronavirus Covid-19 continues its march around the globe. I've written previously about my experience flying to Hawaii after 2 Caribbean cruises with thousands of passengers, including dozens (I assume) from China, and when arriving at HNL, I was "lyfted" home with nary a question on February 3. Later that week, I wrote to Dr. Bruce Anderson, the director of the Hawaii Department of Health, after attending a briefing at the Manoa Neighborhood Board meeting:

"As I listened to your presentation, I reflected that 3 days earlier, I had returned from a Caribbean cruise, with numerous people on board from Asian counties. Yet there was no question for me when I entered Hawaii. Perhaps the agricultural form that all visitors and residents are required to complete before entering the state needs to have a few questions regarding travel and health."

Dr. Anderson replied, "As far as I know, all airline and cruise ship passengers are infor…
Read more