Unless you've been living secluded in a one-room cabin in Lincoln, Montana, you've heard about the most recent school shooting at Marjory Stoneman Douglas High School in Parkland, Florida.

What a terrible event, and what a terrible thing to even write, "the most recent school shooting."  I can't fathom how I would think or react if a shooting happened at Noelani Elementary School, or Logan High School, or other schools where my children attended.  Students, parents, teachers, and school administrators are clamoring for something to be done.  Gun enthusiasts are pushing back... "Guns don't kill people.  People kill people."

I'm no expert in policing, community safety, school administration, or constitutional law. My frame of reference is shaped by avoiding the likes of Sean Hannity and Rush Limbaugh as if they were carriers of the plague (with apologies to truly ill people who are actually infected), by having a sincere concern about the health and wellness of others (even when they don't look like me, worship like me, or vote like me), by reading real news, and by interacting with friends on multiple sides of the gun control debate.

In addition, I have these experiences that I am willing to share (and other experiences I won't):

•  I went through Hunter Education (HE) Instructor training in more than one state.  I've been a HE instructor with over 1000 students.

•  I am a graduate of the NRA Range Safety Officer program (RSO), but I am not a member of the NRA.  I've served as a RSO as well.

•  I am a Certified Wildlife Biologist (CWB®).

•  I've written a journal article on training requirements for the use of gunshot as euthanasia for wildlife.

•  For a number of years, I taught a wildlife techniques course that required hundreds of university students to test a number of firearms of varying calibers, trigger pull tensions, sighting systems, and actions.  This was a popular lab.  Ear and eye protection was required, as was the presence of a RSO. 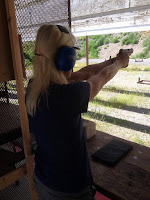 •  I am a teacher in a state (Utah) that allows university students over the age of 18 to carry concealed weapons on campus and in my classroom.  I assume that during every class period, every time I go to the student center for lunch, and at every campus event, there are people sitting near me that have a concealed firearm with a bullet in the chamber.  They may or may not know how to use a firearm.  If I get a glimpse of a firearm they are carrying, I am not allowed to ask a student to show me their concealed firearms permit.  Only the police can ask for this card.

•  In addition, in Utah, K-12 teachers are allowed, and even encouraged, to carry concealed weapons to work.  School districts cannot ask which classrooms and teachers carry these firearms, so parents do not know.


So what do I think?  My main concerns are that family members kill other family members with firearms (intentionally or because of inappropriate firearm and ammo handling and storage), criminals use firearms to commit crimes, and mass shooters use firearms to cause mayhem and terror.  I recognize that, for all 3 issues, practically every type of firearm has been used.  However, mass shooters in recent years seem to be favoring assault weapons.  I absolutely believe the hunting community has no need for rifles like the AR (ArmaLite)-15.  I believe that people interested in home and personal defense with firearms have no need of assault weapons.  And folk who think they need to be protected from the US government and believe an AR-15 will do it, should be refused access to all firearms because they are demonstrating mental instability.

So here are my baby step recommendations:

•  Limit magazine capacity.  No firearm for hunters and home protection enthusiasts should have magazines capable of holding more than 10 rounds, but I'm flexible here.  Let's say any whole number between 1 (single-shot) and 12.  I would argue that no hunter should be hunting if they need more than 2 shots (but that's another story), and even though the action movies have scenes with people spraying bullets back and forth, if you can't protect yourself with 10-12 bullets, you have bigger issues to be worried about.  No grandfathering of existing large magazines here.  Turn them in for destruction.  Reimbursement is up to the politicians.

•  Since assault weapons are absolutely not necessary for any type of quality hunting experience, their use as hunting firearms should be strictly prohibited.  "But it's fun!"  "I use it for varmint hunting!"  Tough.  In general, these are inferior hunting tools, and hunting is supposed to bring out the best of ethical hunters.  Use an assault weapon for hunting, and lose your hunting PRIVILEGE for 10 years.  I am convinced that both the founder of modern wildlife management, Aldo Leopold, and the presidential champion of hunters and hunting, Teddy Roosevelt, would agree with me here.  Hunters should be focused on fair chase, humane death, reducing wastage, shot selection, proficiency, and safety, and not whether a firearm is fun to shoot. 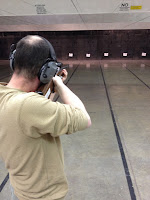 •  Training requirements.  Require a competency test, with required renewals over some time period, for all firearm owners.  Currently, competency requirements are minimal at best and usually non-existent.  A responsible gun owner MUST be able to demonstrate knowledge of safe firearm and ammo storage and handling.  No matter how experienced they say they are, in hunter education I require every student to demonstrate safe handling with a dummy rifle.  I emphasize that they are never, ever, ever to believe another person when that person claims, "It's not loaded."  I support an actual shooting test.  In Utah, you can get a concealed firearm permit even if you had never before touched a firearm in your life.  Should you feel safe that a person in the classroom has a concealed firearm?  No training, no minimum competency, no demonstrated ability to handle the firearm safely, or to hit a target at 10 feet, or to safely retrieve a loaded firearm from a child who has it in their innocent hands...  There's a disaster just waiting to happen.

•  Ban convenience.  A number of shooting ranges are public.  Ban the use of assault weapons at these public facilities. Make the use of these firearms more difficult.  The fact is, I don't want my tax dollars paying for your practice with an assault weapon.   I do want my tax dollars to go toward using these facilities as firearms competency test and practice centers.

•  Ban bump stocks.  They are toys attached to a deadly weapon.  And note the magazine limitations above.


•  Every gun owner must be held legally responsible for the safe storage of their firearms.  Left the key to the ammo safe laying around?  Shared with the 16 year old the combination to the gun locker?  Keep a loaded assault rifle leaning against the door jam in case a skunk wanders into the yard?  No more, "It was just a tragic accident."  There are no accidents... there are poor decisions that result in purposeful or unintended shootings. Driving while under the influence is a poor decision with potentially tragic consequences.  Gun owners should be held to a similar standard of judgement.


I haven't suggested an age limitation here, even though the national conversation is revolving around raising the age for purchasing an assault weapon from 18 to 21 (and it is already 21 in some states).  Frankly, I know some 18 year olds who are more stable and mature than some 50 year old gun owners.  Demonstrating competency is the key here.  After all, demonstrating competency is what allows 18 year olds to drive a car or even get their pilots license.

Oh, and have you noticed that I haven't defined an "assault weapon?"  This gives you something to work on.  And if I sound opinionated, don't get me started on lead ammo used in hunting!