Keehi Harbor... in search of cats 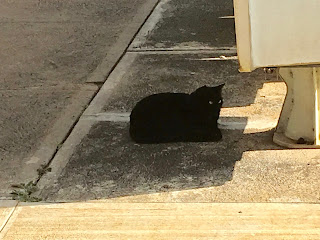 Cats on Oahu are not randomly distributed over the landscape.  There are some places that have a high density of cats (I can think of the Hawaii Kai Park & Ride a couple of years ago, as well as the UH Manoa campus), and places with a low density (UH's Lyon Arboretum, Kapiolani Park, or Magic Island).

In general, cat management concerns relate either to density (lots of cats in a small area) or behavior (one or more cats with "inappropriate" behaviors - predation, spraying, droppings, noise, et cetera).  In Hawaii, there is also a conversation about parasite shedding (Toxoplasma gondii).  That will be the topic of a future blog. 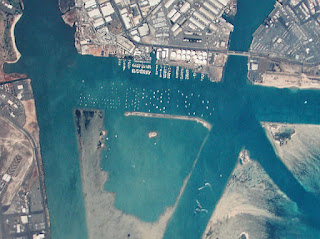 I have heard of complaints about "large numbers of cats" at the state-managed Keehi Harbor, located about 5 miles from Waikiki, near HNL on Sand Island.  I don't know a lot about this boat harbor, but I spent many mornings a few years back sailing around this triangle-shaped island in the harbor again and again and again.  Caroline and I were learning to sail, and we were trying as hard as we could not to capsize our 12 foot sailboats here... the water didn't look particularly clean.  We eventually graduated up to a Cal 20, which allowed us to leave the harbor and go outside the reef.  Fun times!

Cats were never an issue on the water, and I don't have any memory of seeing them.  But apparently cats are now a BIG DEAL at the Keehi Harbor.  Why?  Supposedly, the numbers of cats were extraordinary, affecting human and animal safety, although in one report the concern seemed much more in the nuisance category.


Boating Safety Education Specialist Cliff Inn was kind enough to show myself, Lisa Fowler (President and CEO of the Hawaii Humane Society) and Allison Gammel (Community Relations Director of the HHS) around a portion of the facility today. This was not a scheduled meeting, so Cliff was not responsible for giving us the official tour.  I considered this an "unofficial" tour, as the three of us were just trying to get an understanding of the cat issue at Keehi Harbor.  We spent an hour looking around, and I saw 4 cats.  Two were very skittish and fled as I took a step toward them, 1 was just lying on the ground watching me as I walked up (photo at top of page, ear-tipped denoting it had been spayed), and I observed another lying on the ground near a row of parked cars and trucks under covered parking.

In our unofficial discussions with Cliff, it looked like the main cat issues, not in any priority order, were as follows:

•  Cats were using the landscaping around the buildings as their latrine (I could see it and smell it). Health and safety issue, as well as nuisance issue.

•  Cats were climbing on vehicles, leaving footprints behind.  Nuisance issue.

•  Cat feeders were leaving excess food and garbage on the ground, attracting rats and mongoose.  Health and safety issue, as well as nuisance issue.

•  Cats may be shedding oocysts of Toxoplasma gondii into water. Wildlife issue.

•  Cats, once trapped, were being returned to the boat harbor, since some of the microchips indicated that the cats "belonged" to someone at the facility.  Policy issue.

•  Cats were having kittens at the boat harbor.  Nuisance and policy issue.


Cats were not Cliff's specialty nor assignment.  He estimated 20 cats [later, revised to 9].  A previous report estimated 100 cats.  I'm guessing it is a number greater than 9 and less than 100.


There were a number of places providing cat "harborage," or shelter.  A homeless man was known to live behind some large concrete blocks, and I suspect he fed some cats.  Other than this man, a person with a boat at the harbor was know to feed cats, and a man and a woman without a boat at the harbor were known to leave cat food at the edge of the state's property line.


Without going into great detail, some first steps here would be to have a listening conversation with the feeders and homeless man, clean the rat and cat harborage, screen off the bottoms of the containers near the building to remove shelter, determine whether there are employees feeding cats (I think there is a strong possibility of this), spay and neuter 100% of the cats (no kittens!), adopt out socialized cats, remind all boaters to not feed the cats on their own, consider a managed colony, remove any diseased animals, clean and improve the landscaping near the buildings to make the use of these areas as latrines less likely (a cat caregiver may even clean the latrines regularly), and make appropriate decisions about phone numbers and addresses for all microchipped cats.

A side note on the issue of cleaning the feces currently in the lawn and landscaping: what happens when trash is never picked up?  An area looks... trashy.  There's trash all over.  Thus, there is usually a system for regular collection and disposal of trash.  So what happens when cat feces are allowed to accumulate?  Our "disgust response" toward feces is real and a significant factor here.  'Nuff said.

Some of these ideas will cost money, some will use staff time, and some will use volunteer time.  The goal?  An gradual reduction of cat numbers to "acceptable levels," with all new invading cats immediately being trapped, altered, evaluated, and relocated or absorbed into the managed colony. 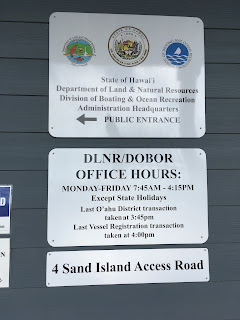