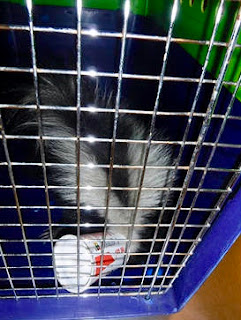 Hawaii, being an isolated island chain about 2500 miles from a continental land mass, is considered the kingdom of endemism, species found here and nowhere else.  The limited numbers and types of organisms that found their way to these islands adapted to the conditions within the varying microclimates, and the rest is... biological history.  Most terrestrial mammals found the going impossible.  The journey was too long, or too salty, or too rough.  Prior to settlement by humans, the only terrestrial mammals on the Hawaiian Islands were 1-2 species of bats; today, only the Hawaiian hoary bat remains.  The first waves of colonizing humans later brought pigs, rats, chickens, and dogs.  Today, there are a number of introduced mammals, including cats, mongoose, mule deer, cattle, sheep, goats, and even brush-tailed rock wallabies.

For the most part, Hawaiian authorities have learned their lesson, and importations and intentional releases of vertebrates are illegal or discouraged.  Within certain guidelines, you can import guinea pigs and chinchillas, but porcupines, dog and cat hybrids, and hares (Lepus spp.) are all specifically prohibited. Although the lists seem somewhat arbitrary, I am heartened by the statement, "Any animal that is not found on any of the lists is considered prohibited."

So what is this about a striped skunk in Honolulu?

Yesterday, stevedores working at Pier 1 noticed a strange animal wandering the pier.  It was considered strange because of its unusual markings and the fact that it had a yogurt cup on its head. They confined it, and the Hawaii Department of Agriculture (HDOA) was called in.  It looks like a striped skunk, and it was probably a stowaway:

“It’s likely it was a hitchhiker, probably on a vehicle,” said Jonathan Ho, HDOA’s Plant Quarantine Branch. “It was quite dirty, quite greasy, and so it’s very possible, and they do unload vehicles there, so it’s very likely it was a stowaway inside an engine compartment, nice and warm, jumped in, got on the boat, and he got a seven-day cruise to Hawaii.”


HDOA staff are preparing samples to be tested on the mainland for rabies.  Since the guidelines for rabies testing usually involve sending in only the head or brain of the animal, I suspect this skunk will not become a new tenant at the Honolulu Zoo (the zoo has their own, de-scented striped skunk, named "Pepe").

Often, we don't get the opportunity to observe the actual invasion process.  Kauai was mongoose-free for decades, but in 2012, one was live-captured in Lihue, and there have been additional captures and sightings since then.

I wouldn't be worried about a striped skunk invasion.  If the sample comes back testing positive for rabies, I expect the area surrounding the pier might be depopulated of cats and dogs, in additional to some area-specific rabies vaccination requirements.

Report all sightings of potential dangerous and invasive species to the appropriate authorities.
•••

Update: On August 30, ANOTHER skunk was located and trapped, this time on Maui.  It appeared to be brought into Maui accidentally in a shipping container (a stowaway). 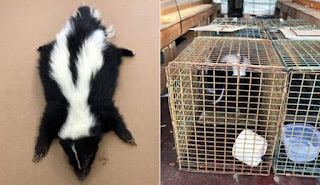 More on striped skunks and their dispersal can be found on this blog by The Nature Conservancy.
bats endemic exotics Hawaii Honolulu invasive species Kauai mongoose oahu rabies skunk wallabies